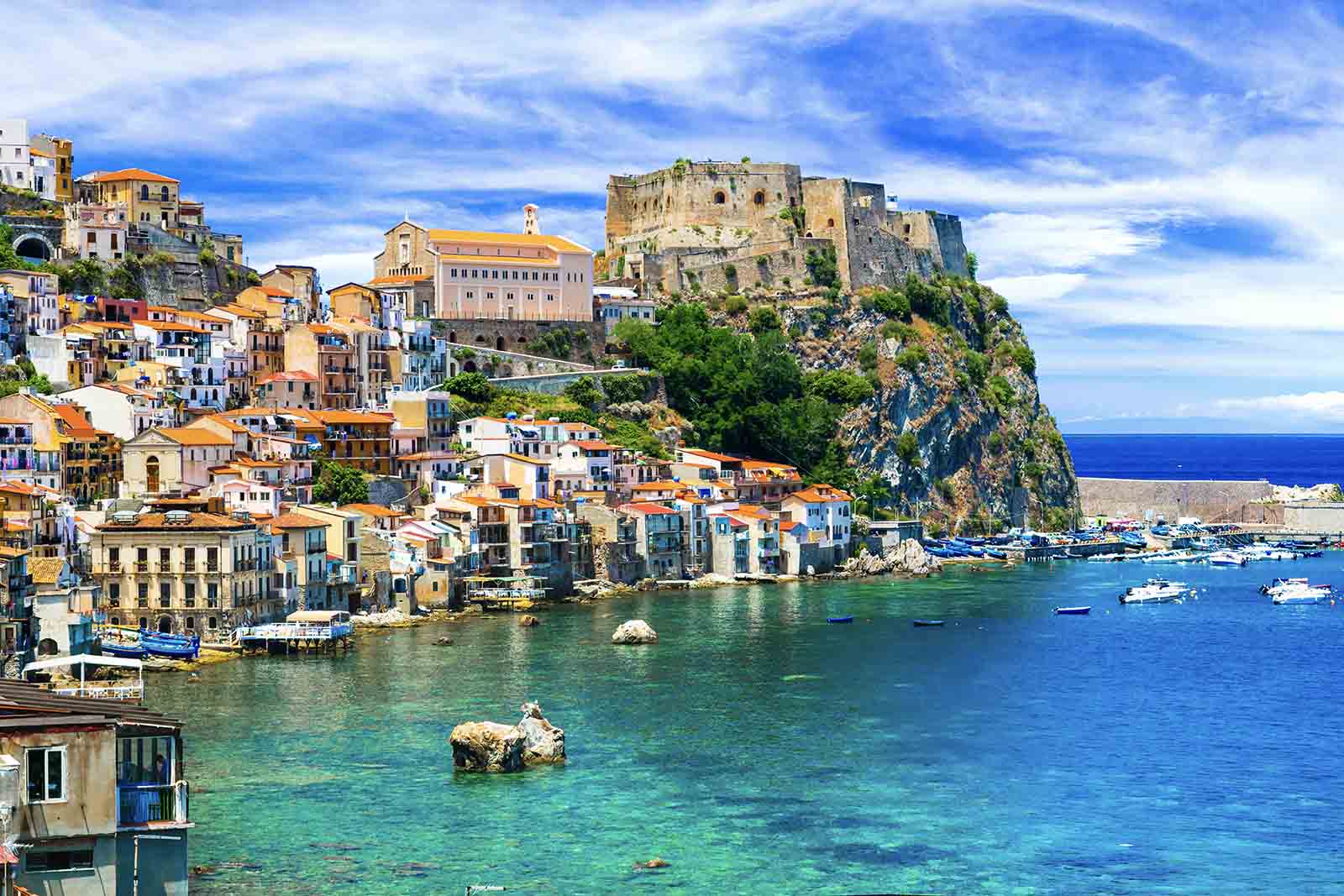 The Paesana tour of Regional Italian Cuisine has taken us through the fertile landscape of Emilia-Romagna, around the seafaring island of Sicily, into the provincial underpinnings of Lombardy, and straight into the beautiful madness of Naples. Our next trip takes us to Calabria, where the prevailing culture of riposo asks that you relax and slow things down a bit.

Riposo translates to “rest,” and it happens every day in Calabria—typically from noon to 5 p.m., but sometimes starting at 11 a.m. That’s right; the rules of life in Calabria are so nonchalant that time itself doesn’t hold a strict schedule.

Calabria resides on Italy’s southwest tip, between the Tyrrhenian Sea on the west and the Ionian Sea to the east. Some say that Calabria looks as though it’s kicking Sicily—we like to believe it’s merely lounging beside it. The laid-back collection of medieval villages within five major cities is best known for its sprawling beaches framed by dramatic cliffs, coves, and surreal rock formations. Deeper into the heart of the Calabrian landscape, you’ll find thick forests dotted with canyons, streams, and waterfalls.

As for the food, la cucina povera has fed the inhabitants for generations. Translated loosely to “cooking of the poor” or “peasant food,” la cucina povera in Calabria makes the best out of cheap and widely available ingredients, highlighting the ingenuity of the poor Italian cooks who create the dishes. And while “peasant food” can be a common theme throughout all Italian cuisine, in Calabria, it’s accompanied by a carefree attitude—and plenty of Calabrian chili peppers, which can be found stateside in markets packed into jars with oil.

Let’s take a look at Calabrian cuisine, from specialty ingredients to entire dishes that make up this regional menu.

There’s perhaps no single ingredient that better represents Calabria than ‘nduja. This fiery, salty, funky, and buttery pork salume is so integral to the local cuisine that there’s a huge annual festival devoted to it. ‘Nduja—pronounced en-DOO-ya—is a soft and spreadable fermented salume, comprised of ground pork parts, such as belly and jowls, and spiked with mouth-numbing Calabrian chilies. The very best ‘nduja comes from the Calabrian village of Spilinga, where the mixture is packed into casings, strung up and smoked then left to cure in the Tyrrhenian coastal breeze. Though it can be eaten cold, there are special ‘nduja heating vessels meant to make it even easier to spread the spicy pork product on toasted, crusty bread. Meanwhile, its soft texture and tendency to essentially dissolve when it comes into contact with heat makes it a unique ingredient to add into sauces, soups, stews—it even makes for an amazing pizza topping. And thanks to it’s fermented nature, ‘nduja keeps forever.

Staying in the world of pork, frittole perhaps best symbolizes the la cucina povera mindset of the Calabrian food scene. Typical of the coastal city of Reggio Calabria, frittole is an ancient preparation that uses the black pig of Calabria, a special and highly prized swine only found in this specific region. In this all-encompassing pork dish, absolutely no part of the animal is wasted. First, the walls of an oversized copper cauldron are lined with pork fat, which is heated until it melts. Then, the parts that require the most time to cook are added—this includes the pig’s feet, snout, ears, offal, and large swaths of pork skin. After that, into the cauldron goes other cuts like ribs and shanks, while the belly and jowls are typically set aside for ‘nduja. The entire process takes seven or eight hours, resulting in a heaping pile of unctuous, velvety pork cuts that shine with flavorful fat.

While ‘nduja and pork in general are a major source of pride in Calabria, the most treasured local culinary contribution might be the humble Tropea onion. More specifically, it’s the cipolle rosse di Tropea. Grown by farmers along the steep cliffs of Tropea and around the coast in the towns of Zambrone, Briatico and Cape Vaticano, the torpedo-shaped Tropea onions are known for their surprising sweetness and singular aroma. A ubiquitous ingredient in Calabria, Tropea onions are eaten on sandwiches, pasta dishes, salads, and sliced over pizza. And while these onions take beautifully to grilling and roasting, the delicate sweetness means you can eat them raw with just a touch of olive oil. But perhaps the best application for Tropea onions is to make them into a truly remarkable marmalade, where they are combined with sweet peppers and cooked down for hours until transformed into a paste that can be spread on crostini or eaten with cold cuts and cheese.

While black licorice isn’t exactly everyone’s favorite food item, one cannot talk about the foods of Calabria without discussing the uniquely flavored root. According to many sources, Calabria grows the absolute best licorice in the world and huge swathes of the countryside are covered with the plant’s bright yellow flowers. The harvested roots are turned into hard and soft candies, as well as liqueurs. Licorice is so highly regarded in Calabria that the Amarelli family, licorice producers since 1731, opened the Giorgio Amarelli Museo della Liquirizia—otherwise known as the Licorice Museum.

With about 500 miles of pristine coastline, it’s no wonder that Calabrian are seafaring people with a healthy love of fish and seafood. Swordfish is arguably the most popular item on the menu, but you’ll find plenty of anchovies, sardines, tuna, red mullet, and turbot. There’s also plenty of squid and octopus, along with shellfish such as lobster and various species of prawn. In keeping with the “peasant food” vibe of greater Calabria, fish and seafood is traditionally fried or cooked into soups and stews. But perhaps one of the most striking products of the sea in the region is what’s known as “Calabrian caviar.” A blend of tiny, juvenile fish, with chili peppers and wild fennel seed, it’s a spread that’s similar to ‘nduja and is called rosamarina on the Tyrrhenian Sea and sardella on the Ionian coast.

As is with any article on Regional Italian Cuisine, it’s impossible to list every single food or dish enjoyed by locals and tourists alike. The above list is merely a sampling of what’s possible in Calabria. Other dishes popular in the region include lagane e cicciari, wide ribbons of pasta cooked with chickpeas and rosemary; ravioli Calabrese, a mix of Provola cheese, soppressata salumi and pecorino in a spicy tomato sauce; pitta, a pie-like baked dish filled with local meats, cheeses, and vegetables; licurida, a simple soup made with seasonal veggies and Tropea onions; and Calabrian stuffed aubergines, eggplant hollowed out into halves and stuffed with pecorino, bread, eggs, parsley, garlic, and covered with tomato sauce.