The Story Behind The Sauce: Vodka

Vodka sauce dishes such as penne alla vodka burst onto the Italian food scene in the 1970s, but did it originate in New York or Italy? 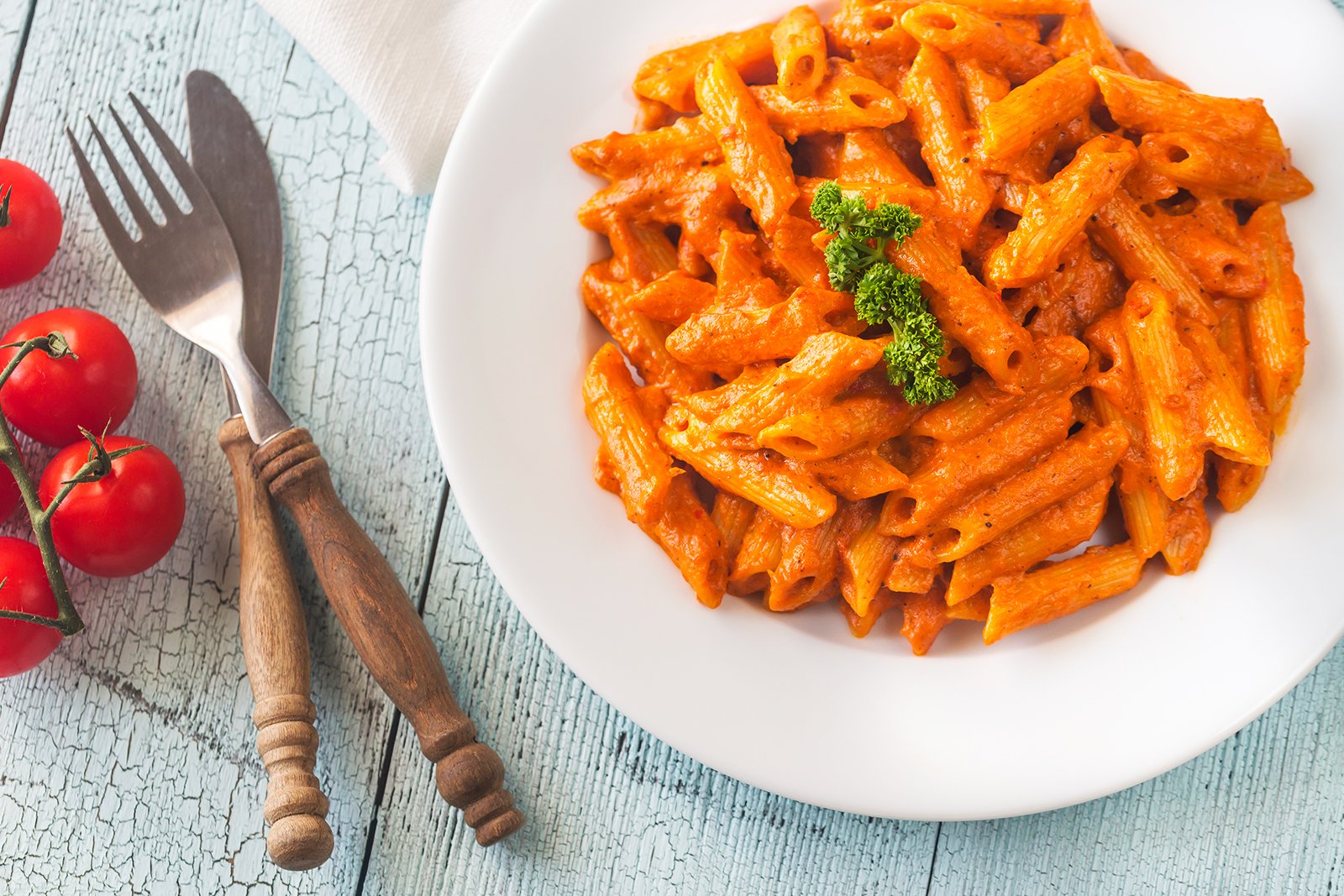 We all know that vodka is Italy’s most popular alcoholic beverage. In fact, 9 out of 10 Italians prefer vodka to red wine.

Of course, that’s utter nonsense. We have no reason to believe that any Italian prefers vodka to red wine, so let’s get that out of the way. On the other hand, one of the most iconic dishes in the pantheon of Italian cuisine is prepared with vodka. You know it, you love it: It’s Vodka Sauce. Italian restaurants from the east to west coast all serve a variation on the dish, with some using penne and others opting for rigatoni, and still others choosing to incorporate prosciutto or some other cured meat.

No matter where it’s served and what adjustments are made, vodka sauce is known as a thin, smooth pink sauce with an acidic tomato-y bite that’s tempered by a cream finish. As the sauce cooks over a low flame, the tomatoes caramelize and turn jammy, melding and combining with the vodka. This leaves the eater with a sauce that’s creamy and rich, and luxuriously silky on the tongue.

Basically, vodka sauce is a pink sauce with a splash of booze that exists somewhere between a tomato sauce and an Alfredo sauce.

The Origins of Vodka Sauce

Like most Italian recipes and sauces, there’s a measure of debate as to where and when it was first established. Unsurprisingly, the two places that lay claim to the invention of vodka sauce are New York City and Italy. We’ll start stateside, with Orsini Restaurant in New York, where it is believed that Chef Luigi Franzese invented, specifically, penne alla vodka, in the 1970s. The second New York-based claim comes from food historians, who posit that the dish was actually invented by James Doty, a Columbia University graduate, who created the dish in the 1980s.

As for the Italian origin of the sauce, two separate stories deliver different sides as to who first concocted the creamy sauce in the old world in the 1970s. First, in The Ultimate Pasta Cookbook, author Pasquale Bruno Jr. says vodka sauce was first conjured at a restaurant called Dante in Bologna. But, yet another cookbook, Williams-Sonoma Essentials of Italian, says it was created by a Roman chef who worked for a vodka company and wanted to popularize the spirit in the country.

Either way, at least one author, Barbara Kafka, who wrote Food for Friends, says that vodka sauce was definitely established in Italy way before it gained a following in America.

Vodka sauce is a pink sauce with a splash of booze that exists somewhere between a tomato sauce and an Alfredo sauce.

Why Is There Vodka In Vodka Sauce Anyway?

You might be asking yourself, “Self, why even bother using vodka? I’m sure one can create a creamy pink sauce without it.” Well, you’d be right...mostly. While it’s not as extraneous as, say, the ingredients that make a red velvet cake, vodka doesn’t technically need to be there to achieve the smooth, silkiness of the sauce.

However, it does actually serve two special purposes: one related to aroma, and the other to its ability to act as an emulsifier. This might get a tad technical, but hang in there.

Alcohol is a wonderful solvent for aromatic compounds, and it’s also volatile and evaporates easily. This means that as the vodka’s particles drift into the air, they each carry aromas along for the ride. So, as you chew your penne or rigatoni alla vodka, the vodka particles waft flavorful aromas to the back of your mouth, creating a heightened sense of euphoric enjoyment of food.

Secondly, alcohol boasts the power to emulsify, bonding water and fat together until they exist in smooth harmony. This is the same principle at work when you add dijon mustard to a vinaigrette in order to keep your oil from separating from your vinegar. In a vodka sauce, the vodka helps maintain a cohesive texture, allowing the creaminess to meld with the tomato base. And sure, you could use wine to the same effect, but in a sauce as rich as vodka sauce, it’s better to use a small amount of alcohol that will impart as little of its own flavor as possible.

And don’t forget that any alcohol inherent in vodka is cooked out completely during the cooking process!

We believe the reason so many people love to order this sauce in a restaurant is because it’s not all that easy to perfect at home. That is, unless you pick up some Vodka Pasta Sauce from Paesana. With prep work that only requires you open a jar, our Vodka Sauce is made with Italian plum tomatoes, heavy cream, onion, 100 percent extra virgin olive oil, garlic, parmesan and romano cheese, along with butter basil, sea salt, black pepper, and, yes, vodka.

With our Vodka Sauce, you can make penne (or rigatoni) alla vodka, lobster alla vodka, penne alla vodka with seared chicken or shrimp, chicken parm alla vodka—basically, no matter the vodka dish, it’s made exponentially easier at home with Paesana. And don’t forget our Vodka Pizza Sauce for a taste of a high-end pizzeria right in your own kitchen!