The Italian island of Sicily is home to some of the most unique and fresh cuisine in the entire country. 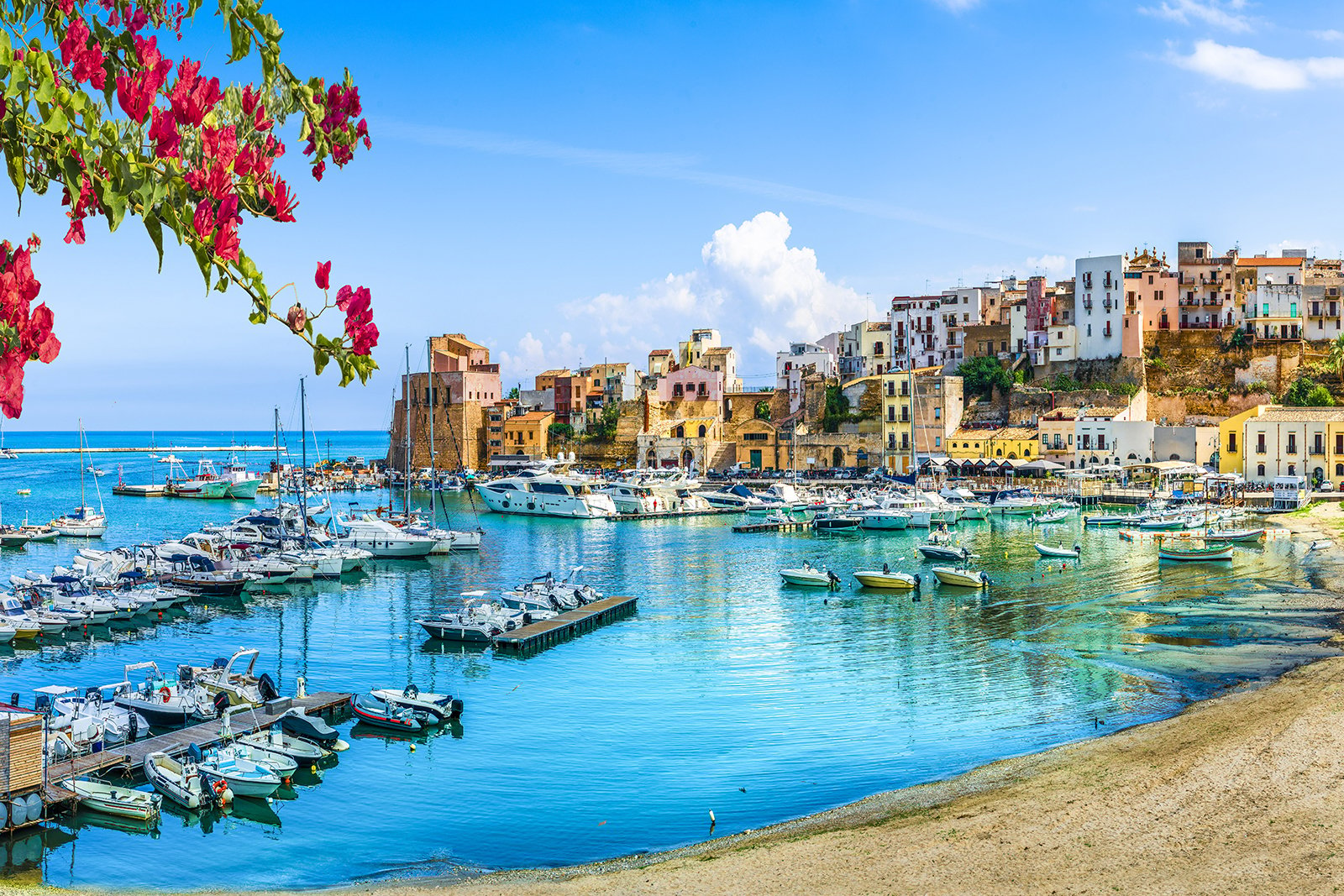 Our ongoing tour through the cuisines of Italy takes us to the island of Sicily. Only two miles off the coast of the “toe” of Italy’s mainland, Sicily is the largest island in the Mediterranean Sea. With that pivotal position in such a crucial waterway, every Mediterranean culture of the last 2,000 years has touched the shores of Sicily—and each one has left a profound mark on the island’s culture, especially when it comes to the food.

Arabs brought citrus. Greeks cultivated olives. Spaniards introduced tomatoes via the new world. Then, as the centuries ticked by, the soil and sun of the island took those key ingredients and made them uniquely Sicilian.

Even though much of the cuisine can be traced back to foreign influence, Sicilian cooking culture today is influenced mainly by the island’s fertile land and the sea that surrounds it. Fruits and vegetables are grown on the rugged landscape where livestock graze, while seafood is reeled in from the Mediterranean, Ionian, and Tyrrhenian seas.

The resulting regional cuisine is one that wastes nothing and savors every morsel. With that, let’s take a look at some of Sicily’s most iconic dishes.

One of the most typical Sicilian dishes just happens to be a room-temperature vegetarian dish with origins that date back to the 18th century. Basically a Sicilian version of ratatouille, caponata classically combines eggplant and tomatoes with capers, olives, onions and celery, along with other ingredients such as pine nuts, raisins, almonds, and peppers. Each veggie is sautéed one at a time, then seasoned with salt and simmered together in vinegar. The result is a tangy medley of sweet and sour flavors. Sicilian cooks know that the longer the caponata sits, the better it tastes. That’s why it’s usually prepared a couple of days before serving, so the flavors can deepen. When it’s finally ready to eat, it’s served as an antipasto with Sicilian-style focaccia bread.

What you might know from the menu at your local pizzeria simply as “rice balls” is actually arancini—and in Sicily, these fried gems are big, golden, and not always a perfect ball shape. Rolled in breadcrumbs and fried in oil, arancini were first developed during the Arab rule in Sicily in the 10th century and derive its name from its resemblance to an orange (arancia). Though called a rice ball, there’s so much more going on here than rice. A popular street food in Sicily, particularly in Palermo, arancini are often filled with a savory center that can consist of meat sauce with peas, dried prosciutto or other cured meats, cheeses like pecorino and mozzarella or dried capers. There’s even a sweet version dusted with cocoa and sugar.

Any island surrounded by three seas is bound to boast a number of seafood specialties. Sicily is no exception. First, there’s pasta chî sàrdi—a simple dish that perfectly exemplifies Sicily’s diverse culinary heritage. Another dish with Arabic origins, pasta chî sàrdi is a delicately flavored pasta dish with saffron, fresh sardines, wild fennel, pine nuts, and sultanas (golden raisins). Bucatini is typically the pasta of choice for this dish, with ingredients clinging to the long, hollow strands. It’s truly as rustic as any pasta dish can get, with ingredients found around the entire coast of the island.

As the centuries ticked by, the soil and sun of the island took those key ingredients and made them uniquely Sicilian.

Sardines are back, but rather than served with pasta, sarda a beccafico butterflies and stuffs the fish with a flavorful mixture of toasted breadcrumbs, parsley, anchovies, pine nuts, and raisins. These stuffed sardines are sometimes rolled then skewered and grilled or packed into a baking dish and separated with bay leaves before being drizzled with lemon juice then baked. Just as with pasta chî sàrdi, this dish is best enjoyed with the freshest possible sardines, as the small delicate fish is at its most flavorful the moment it’s removed from the sea.

This next dish is, admittedly, not for everyone. A staple street food in Palermo, pani ca meusa is a sandwich of fried strips of calf’s spleen topped with a squeeze of lemon juice and served on a soft vastedda bun. At times served with a pile of shredded caciocavallo cheese on top, the sandwich is revered by the locals and highly recommended to the more courageously hungry visitors to the Palermo street markets.

A far less intense sandwich of Sicily, panelle consists of chickpea fritters traditionally served between two slices of country bread. Another product of Arab culture, panelle needs only a squeeze of lemon juice—and maybe some fresh ricotta cheese—before it can be quickly devoured en route to the next food stand.

Even though much of the cuisine can be traced back to a foreign influence, Sicilian cooking culture today is influenced mainly by the island’s fertile land and the sea that surrounds it.

Chances are, every Italian cook you know claims to make the best meatballs. What’s more, plenty of Italian regions lay claim to inventing the meatball as we know it today. But the strongest case for meatball zero very well might be the Sicilian city of Catania. Invented during a time when eating horse meat wasn’t nearly as taboo as it is today, polpette di cavallo mixed horse with eggs, breadcrumbs, parmesan, parsley, lemon zest, and pepper. These “proto-meatballs” were usually grilled, fried, baked or simmered in sauce.

Let’s end our tour with something sweet—and forget about the horse meat incident. Brioche con gelato is basically ice cream on a bun. A dessert sandwich that features heaping scoops of gelato on a soft, buttery brioche bun, brioche con gelato is sometimes even eaten for breakfast in Sicily.