Get To Know Italian Cured Meats 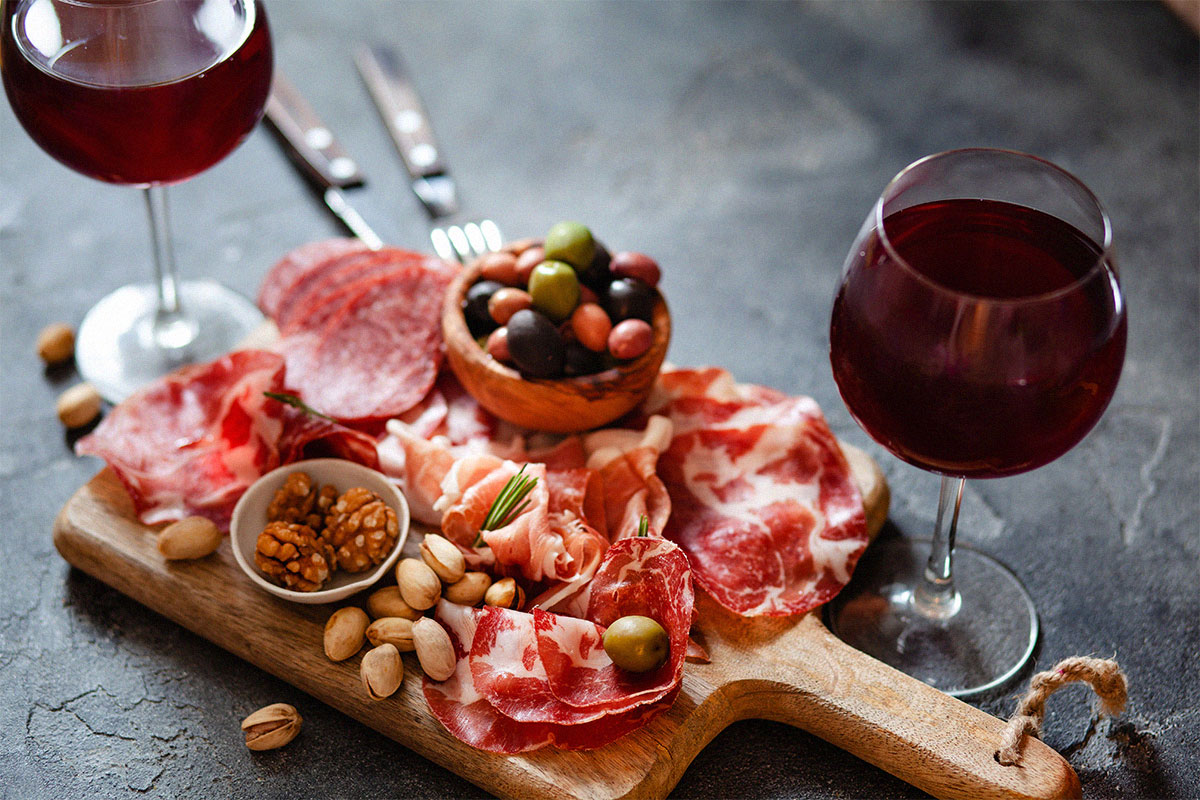 Back in the days of yore, well before refrigerators were a common household appliance, people had to rely on other means to keep their food from becoming bacteria-carrying petri dishes. Many techniques were attempted in the name of preservation, including pickling, spicing, smoking, drying, and, of course, curing with salt.

One of the oldest and most common ways of extending food well past its perceived shelf life, salt curing works by extracting water from cells through osmosis—yes, that word you vaguely remember from 10th grade science class. Food spoilage is generally caused by bacteria, living organisms that ingest the food and in doing so cause it to be altered in texture, color, smell, and flavor. The salt cure-triggered osmosis dries out the food, killing the bacteria before it can spread its spoilage.

While certain bacteria growth on food is indeed bad, the threat of its propagation led directly to the invention of the salt-curing process, which in turn sparked the creation of our favorite salt-cured Italian meats. So, in a way, we should all say a collective “grazie” not only to bacteria, but also to society’s lack of quality refrigeration back in the day.

Necessity is the mother of invention, and the necessity to save food from spoilage using a salt cure gave rise to some of the best Italian pork products ever conceived—prosciutto, pancetta, speck, guanciale, and lardo. At this point, you might be asking yourself, “have they never heard of bacon? What’s the deal with the blatant bacon snub?”

Bacon is absolutely one of humanity’s most significant and celebrated cured pork products, but to us, bacon is so popular that it transcends the cured meat conversation. With this in mind, we’ve decided to focus strictly on the more Italian-forward cured pork variations. So let’s find out what the main differences are between prosciutto, pancetta, speck, guanciale, and lardo, and also what makes these foods so deliciously desirable.

Typically made from a pig or wild boar’s hind leg, prosciutto—the Italian word for ham—is salted and cured for several months, before it’s pressed, washed, and hung with care to dry slowly in a cool and stable environment. Prosciutto’s traditional origin is the central and northern regions of Italy, but modern times has made this popular selection widely available from multiple domestic and international sources. Though the most famous versions are prosciutto crudo de San Daniele and prosciutto crudo di Parma.

Most Italian-American households have a proper stock of prosciutto tucked away in that refrigerator drawer that always takes on the name of whatever is stored there at the time—in this case, the “cold cut drawer.” Versatile and singularly delicious, prosciutto is grown-up lunchmeat that’s silky to the touch with a buttery texture that divinely melts in your mouth. It’s often served as an appetizer at parties, either wrapped around cheese, veggies or even fruit, or simply laid bare on a plate in all its simple glory. The saltiness and marvelous streaks of pure-white fat make prosciutto a wonderful counterpoint to crisp veggies and sweet, fresh fruits like melon slices. Prosciutto has also become a trendy addition to charcuterie boards and tapas menus, but one of the grandest presentations of prosciutto is also the most rustic: Thinly sliced and placed on crusty Italian bread with fresh mozzarella and a light drizzle of extra virgin olive oil.

Most Italian-American households have a proper stock of prosciutto tucked away in that refrigerator drawer that always takes on the name of whatever is stored there at the time—in this case, the “cold cut drawer.”

Pancetta is basically bacon that hasn’t been smoked. Just like bacon, it’s cut from pork belly, but instead of spending time in the smoker, pancetta is cured with salt and spices before it’s either presented in a slab or rolled into a gorgeous spiral of white fat and varying hues of pink. The rolled version of pancetta is a product of northern Italy, while the pancetta slabs are more typical in central and southern Italy.

Spiraled pancetta is sliced paper thin and usually eaten “raw” either by itself or wrapped around vegetables, much like prosciutto. Pancetta is great for mixing with other foods—think pancetta-wrapped scallops—because the lack of smokey flavor gives it a gentle, less overpowering flavor. Some cooks have also been known to smoke whole-rolled pancetta in a barbecue setting, which transforms the outside to a deeply flavored rind and permeates the inside with a pronounced smokiness. Slab pancetta is normally cubed and sautéed to add flavor to pasta, soup or risotto. It’s most famously used in the preparation of classic carbonara when guanciale is unavailable.

Speaking of guanciale, here’s where things get interesting. Guanciale comes from the cheek, also known as the pork jowl, and is traditionally cured with a mixture of salt, sugar, and spices. The result is an utterly ethereal version of cured pork with a delicate texture that counters its more robust flavor. Guanciale is traditionally found in the Lazio and Umbria regions of Italy, smack in the middle of the boot.

The sheer amount of fat present in guanciale—a far greater fat-to-meat ratio than exists in bacon, for example—makes this particular cured meat a satisfyingly sumptuous base for pasta sauces. As guanciale cooks, the fat slowly renders into a silky finish, coating each pasta strand in the unctuous, flavorful essence of pork. Like we said before, guanciale is the traditional cured meat used in central Italy’s classic carbonara recipe, but it’s also commonly used in another dish, bucatini all’amatriciana, which you can save time making at home with Paesana Marinara Sauce. No matter where or how it’s used, guanciale’s meltingly tender touch and sweet-savory flavor are a lavish addition to any dish or meat board.

Speck is the cured meat you reach for when you want some intense smokiness injected into your prosciutto experience. Made from the same cut of pork as prosciutto, speck is cured in a rub of spices that can include juniper and bay leaves, before it’s smoked and finally aged anywhere from six months to two years. The process for preparing speck originates in the Alto Adige region of Italy—about as north as you can go in Italy before hitting Switzerland and Austria. It’s the flavorful result when the European smoked style meets the Medittaranean’s penchant for curing.

A dense ham with an almost crimson hue, speck offers a deeper flavor than prosciutto, with a more intense bite that lingers on the palate, thanks to the spice cure and the smoking process. Like other cured meats, speck shines when it’s sliced super thin and enjoyed with hunks of crusty bread, extra virgin olive oil, parmigiano-reggiano, and a glass or two of wine. It can also add a smokey dimension to your carbonara recipe, replacing guanciale or pancetta.

When you want to minimize streaks of reddish meat in favor of pure, white, lucious fat, it’s time to reach for lardo. Made from the thick layer of fat on a pig’s back (you know, fatback), lardo is cured with a mix of salt, herbs, and spice—usually sea salt, black pepper, fresh rosemary, and garlic, but other preparations add coriander, anise, and cinnamon to the curing equation. Lardo is also aged for six months to two years, improving with age. It’s said that the Tuscan region in particular infused this almost all-fat pork product into their diets during extra lean times.

Just imagine being served a sandwich featuring thick slices of lardo. That’s typically how the people of Tuscany enjoyed this delicacy in the early history of the region. These days, lardo is sliced paper thin and served as part of an antipasti spread, prized for its delicate, creamy texture and surprisingly sweet and herbaceous flavor. But the main draw for this particular cured meat is the butter-like charm and umami-rich savoriness that coats the mouth in velvety pleasure with every bite. It’s best enjoyed served simpy with bread and olive oil, but it can also be rendered with rustic potatoes.