A Guide To Pasta Sauce

From Marinara and Pomodoro to Alfredo and Carbonara, every pasta sauce is unique. Here’s a savory rundown of some of the most popular, along with brief histories and modern applications of these Italian specialties. 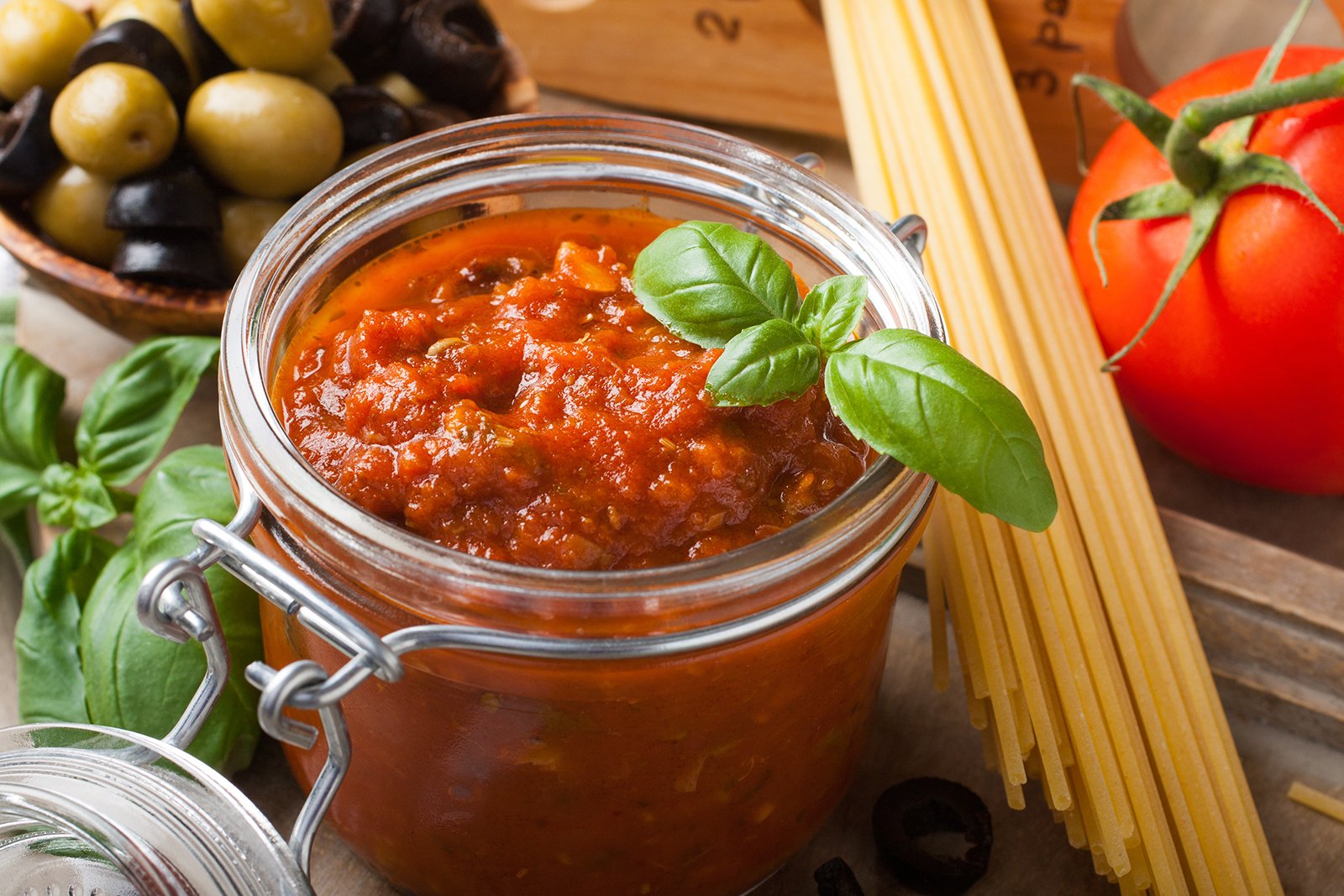 Pasta sauce is a many-splendored thing.

There’s a vast amount of sauce coursing through Italian history, with both Old and New World chefs cooking from a foundation built upon hundreds of years' worth of generational experience. These pioneering cooks created, innovated and perfected sauces that have become restaurant mainstays, homemade classics and even supermarket shelf standbys, all waiting to be eaten with pasta and mopped up with crusty Italian bread.

Each sauce is a world of its own, with ingredients coalescing into an array of versatile flavors that all pair in unique ways to a seemingly endless list of pasta shapes and sizes. But before deciding which sauce goes with which pasta, it’s important to discover and examine the different versions of this ever-present Italian specialty.

Start At The Beginning

It doesn’t get much more basic than tomato sauce, but even that has myriad offshoots. In fact, labeling any pasta sauce as such is problematic, since most start with a base of tomatoes and thus could all be considered “tomato sauce.” This doesn't even take into account the source of those tomatoes (which, in Paesana's case, is Italy). That is why it’s so important to make the tomato-sauce distinction early in a sauce’s lineage.

For many, there is simply nothing better with pasta than a good red sauce. It’s what we all think of when we close our eyes and imagine a big plate of pasta piled high and ready to serve. But, as most Italians will tell you, not all red sauce is created equal. The two main red sauces in the Italian food realm are undoubtedly Marinara and Pomodoro, but how on earth are we supposed to distinguish one from the other? Besides a few variations, both have basically the same standard ingredients: tomatoes, garlic, basil, olive oil and salt.

The difference mainly comes down to the length of time each pot of sauce spends on the stovetop, simmering to delicious goodness. Since Marinara spends less time simmering and has chopped tomatoes, it offers a bright, red hue, and is typically runnier, with larger and zestier chunks of tomatoes. Conversely, Pomodoro features minced tomatoes and enjoys more time simmering, which grants the sauce a deep, dark redness closer to burgundy, and a consistency that is smoother and thicker.

Sure, in the grand scheme of things—and to the casual eater—the differences might seem merely cosmetic, but to the seasoned chef these two sauces offer entirely unique shades of red in various pasta dishes.

When prepared correctly, two of the creamiest of pasta sauces aren’t made with even a trace of cream. Sadly—even tragically—the act of drowning these gorgeously simplistic dishes in a heavy cream sauce is a food crime that is continuously perpetrated to this day.

Unfortunately, cream dumbs down dishes, diluting the Pecorino Romano used in both preparations and rendering a pair of utterly bland plates.

Both dishes have Roman roots, but where Alfredo sauce has a more concrete origin story, the Carbonara tale is anecdotal at best. And while most casual eaters have accepted that cream does not belong in Carbonara, the majority of Alfredo sauce recipes still list heavy cream as an ingredient.

How did this happen? How did cream become so intertwined with these dishes that the heavy grotesque stuff has infiltrated so many iterations across the country, and why is Alfredo sauce in particular still suffering this milky fate? The answers are mostly speculation, but chances are cream was added to the mix as a way to stretch scarce ingredients, making the dish heavier and more filling. Unfortunately, cream dumbs down dishes, diluting the Pecorino Romano used in both preparations and rendering a pair of utterly bland plates. Thankfully, the Internet is loaded with top-notch—and correct—versions of both Carbonara and Alfredo. These preparations allow the traditional ingredients to shine, like the Carbonara’s rich pancetta and Alfredo’s golden butterfat.

Dive into any Italian’s spice cabinet and you will surely find a shaker of red pepper flakes. A staple condiment, crushed red pepper gets passed around the dinner table more than even the common salt and black pepper—it’s the chili kick everyone loves, albeit to different degrees.

Whichever method you use, remember, Arrabiata should be hot—not mildly spicy, but screaming, face-reddening, hot.

With that in mind, the popularity of Italian cuisine’s spicy sauces is a cinch to understand. Arrabiata and Fra Diavolo—translating to “angry” and “brother devil,” respectively—both bring a measure of heat. But where Fra Diavolo is a silky, pleasurably piquant addition to seafood dishes, Arrabiata is a temperamental, fiery, fist fight in your mouth.

Most Arrabiata recipes call for the same basic ingredients: onions, garlic, whole or diced peeled tomatoes, and maybe some basil and capers, or even breadcrumbs. And oh yeah, lots of red pepper. This can be the pre-crushed variety, or you can get your anger out in a healthy way and crush your own peppers. Whichever method you use, remember, Arrabiata should be hot—not mildly spicy, but screaming, face-reddening, hot.

When we think of a Bolognese sauce, the typical vision involves a deep red sauce loaded with a minced combination of beef, veal and pork, with some variations focusing more on one meat and less on the others. With Ragú, on the other hand, most people picture a jar of unremarkable sauce at the supermarket. The truth is Bolognese is a specific type of Ragú—Ragú alla Bolognese, to be precise.

According to the Accademia Italiana della Cucina, the recipe for authentic Ragú alla Bolognese is highly coveted, and was notarized and deposited in the Palazzo della Mercanzia, the Chamber of Commerce of the City of Bologna, in 1982. (Yes, food is that serious in Italy.)

It’s a hearty and robust sauce on its own, that marries beautifully to a dollop or two of fresh ricotta. The creamy, meaty mix matches with a broad stroke of pastas, most notably the sturdier pastas like pappardelle.

A Sauce Of A Different Color

Pesto is that wonderfully pungent green sauce that offers a flavor that can best be described as a backyard oasis: herbal, with a fresh garden aroma, suspended in delicate olive oil. It’s raw, requiring no heat to enhance the taste—instead allowing basil to step out from the shadows and into the spotlight.

Originating in Liguria, Italy’s bastion of basil, pesto is a bright, herbaceous, mouthful of summer. Recipes can vary, but basic preparations always center on basil, garlic, pine nuts and olive oil, with Italian cheeses like Parmesan and pecorino, blended together and then paired with any winding pasta, as the tight twists help the light sauce cling to the pasta.

No, you cannot get drunk off of Vodka sauce. There is indeed real vodka in the sauce, but it appears in such small quantities that the alcoholic bite is nowhere to be found. Plus, any booze that is in the sauce dissipates in the cooking process. So, why is it there? According to the experts, vodka helps tomatoes release dormant flavors while also acting as an emulsifier, preventing the cream from separating and making for a more uniform sauce.

Regardless of where it comes from, it is perhaps the most popular of the Italian cream sauces...

As for provenance, the origin of Vodka sauce is probably the most unclear of all Italian sauces. Some say it came from Italy in the 1970s from a local chef who needed to thin out his sauce, and only had a flask of vodka on hand. Others contend that the sauce originated outside of Italy, and was introduced as a way for local distillers to promote their product.

Regardless of where it comes from, it is perhaps the most popular of the Italian cream sauces, silky and always ready to be paired with penne and accepting of a dash or two of red pepper flakes for a more zesty bite.

Put A Lid On It

There are undoubtedly more sauces we could discuss here, but this is a good place to start with this Italian staple that boasts an impressive shelf life. So pull your favorite pot from the cabinet, gather your ingredients and get simmering. And don’t forget to mop it all up with the best Italian bread you can find.

Paesana is a fourth-generation purveyor of a wide range of all-natural, homemade pasta sauces, high-quality condiments and olives. To learn more about what makes our sauces so special, where to find them, and more, contact us, today.