How a rustic seafood stew made the trip from Italy to the shores of America and eventually to the west coast. 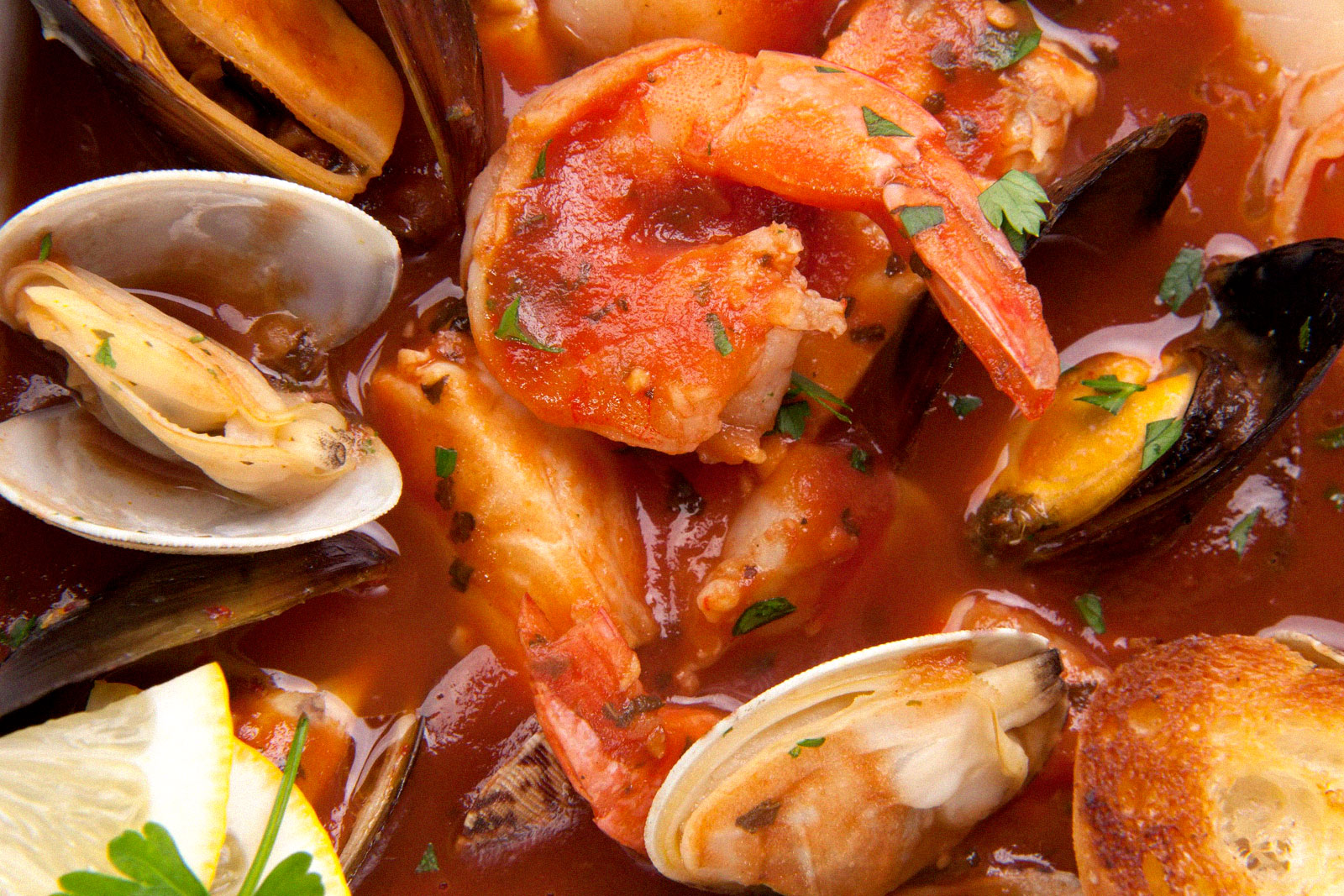 Fishing is hard work. No, not lazily leaning over the rail of a party boat gently floating in the Long Island Sound. That’s relaxing, easygoing, and downright serene. Fishing professionally, for a living, for an entire day with the chance of coming up empty constantly hanging over your head—that’s hard work.

And for the populations of certain regions in Italy, like the port city of Genoa, it was the main source of income. This remained true when Italian immigrants came to America during the time of mass immigration. Some of these first Italian-Americans stayed in the New York area, while others kept going west until they hit San Francisco Bay. Once these Italian laborers were nestled in Northern California, buoyed by their tireless work ethic, they integrated into the local fishing industry.

The industry thrived in San Francisco, especially on the North Beach neighborhood’s Meiggs’ Wharf. But, even a thriving fishing sector has its off days when the lines are pulled up without a single bite. On those lean days, empty-handed anglers would walk up and down the wharf with a large pot asking their luckier dock-mates to chip in what they could—and when the roles were reversed, the favor would be returned.

Local folklore says that the name “cioppino” originated from Italian immigrants shouting out “Chip in! Chip in!” in their heavy accents, thus the phrase sounding like it ended in a vowel. And that’s how Cioppino was born. But in reality, the name comes from ciuppin, the name of a classic seafood soup from the Italian region of Liguria.

And this rustic seafood stew, born out of necessity and kindness, has since become the city of San Francisco’s signature dish, showing up at five-star restaurants, fish stands, and legendary eateries that have survived earthquakes, gentrification, and tech booms alike. The earliest description of cioppino is from a 1901 recipe printed in The San Francisco Call, though the stew was called "chespini" in that publication. Meanwhile, the word "cioppino" first appeared in 1906 in The Refugee's Cookbook, a fundraising effort to benefit San Franciscans displaced by the 1906 earthquake and fire, which destroyed Meiggs’ Wharf and subsequently gave birth to Fisherman’s Wharf.

Cioppino, the dish, is made up of two components: A mix of herb-seasoned seafood, the actual “cioppino,” and the sauce. The two components are prepared separately, then combined before serving. One of the San Francisco restaurants specializing in this dish is Phil’s Fish Market, located south of North Beach and the long-gone Meiggs’ Wharf. The restaurant’s owner gladly shares his proprietary recipe, which includes shrimp, scallops, calamari, clams, mussels, Dungeness crab, and whatever happens to be the freshest white fish of the day.

The seafood medley is thrown into a pot with olive oil, fresh herbs, a couple of dashes of Worcestershire sauce for tang, and a pinch of saffron for a bit of the spice’s mysterious flavor. Generally, the seafood stays in its shells, including the crab, which is cracked and served halved or quartered. As for the sauce, it consists of a combination of fresh, crushed tomatoes and tomato puree, along with the expected herbs and spices, in addition to more unexpected ingredients like brown sugar and a dash of cinnamon.

Since the seafood keeps it shells, it often takes time and a bit of work to eat cioppino. Armed with a special crab fork and cracker, and wearing a bib, it’s not unusual for eaters to spend an hour or two with a bowl of cioppino in front of them. And that’s the way it should be. After all, eating is a celebration—and we should want to stretch out that celebration, and make it last as long as possible.

Make It At Home With Paesana!

A fine, fishy, and fragrant cioppino craves a classic tomato sauce with fresh herbs and plenty of room to add your own custom ingredients. This makes Paesana’s Marinara Sauce the ideal addition to this venerable seafood stew. Simply add our Marinara, along with any additional spices and herbs you choose, and get ready for a seafood feast. But other sauces including Fra Diavolo, Tomato Basil, and Roasted Garlic are also perfect pairs to a flavorful cioppino.