The Story Behind Chicken Parmigiana

How chicken parmigiana became an Italian-American staple in restaurants and home kitchens. 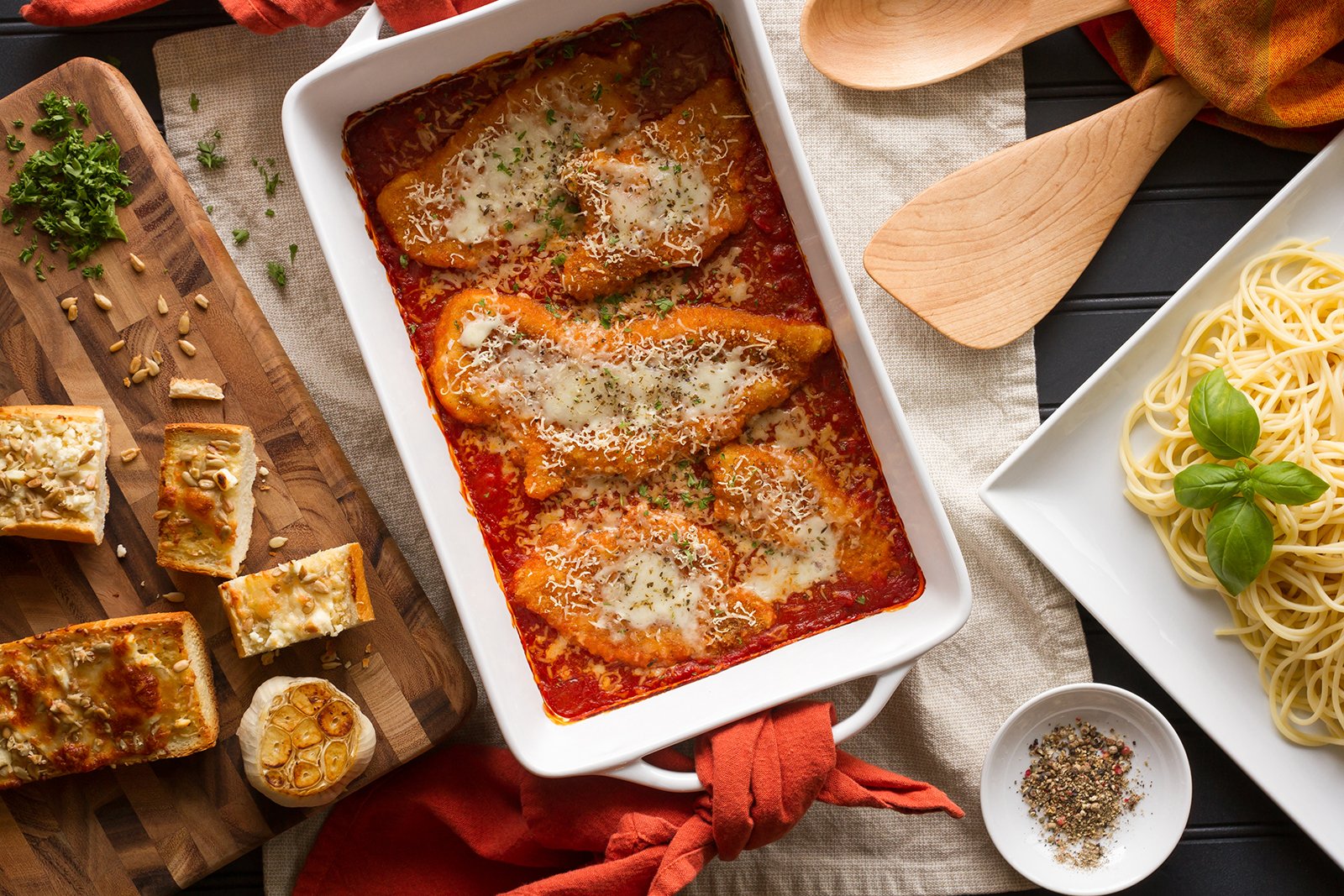 It’s on the menu at every “red sauce” eatery across the country and for many, is their introduction into Italian cuisine. It’s found its way tucked into a hero or plated with a side of spaghetti. It’s been pounded with a mallet, coated with breadcrumbs, covered in sauce, and topped with cheese in home kitchens and gourmet restaurants for longer than any of us can remember.

We’re talking about chicken parmigiana and if there was a food hall of fame honoring Italian-American staples, it would be among the first inductees.

Variations and offshoots aside, chicken parmigiana as you know it always contains the same batch of basic ingredients: Chicken breast, often butterflied, breadcrumbs, Italian seasonings, Neapolitan tomato sauce, and mozzarella cheese. These ingredients can see minor changes depending on the cook’s preference, but for the most part, when you order “chicken parm” in a restaurant or your mom says it’s what’s for dinner, you know what you’re getting.

But it wasn’t always that way. In fact, hop in a foodie time machine to pre-20th century Italy, and chicken parmigiana would be as out of place as chicken satay. So, how did this dish become a ubiquitous mainstay in restaurants, pizzerias, and kitchens?

What Came First, The Chicken or The Parm?

Reverse engineering chicken parmigiana down to its basic components reveals the truth behind its origins. In the Old World, that’s Italy prior to the Italian diaspora—the large-scale emigration of Italians from Italy to America—proteins like chicken were not widely available. As such, the prototypical chicken parmigiana was actually made with breaded, fried slices of eggplant in place of chicken for a dish called melanzane alla Parmigiana.

And about that “parmigiana” moniker. Why is it called “parmigiana” when it’s typically made with mozzarella cheese? One theory lies in the geography of Italy. The cheese we know as parmigiana—or parmesan—is named after the city of Parma in the northern Italian region of Emilia-Romagna, where the delicate cheese was first produced. So, that would lead you to believe that it was named after the city of Parma.

Chicken parmigiana encompasses everything we love about Italian food in one bite.

Maybe, but maybe not. Food historians argue that the dish couldn’t have been named after Parma, simply because melanzane alla Parmigiana wasn’t eaten that far north in Italy. Instead, the dish was a staple of Campania and Sicily, both southern regions of the country.

Italian food writer Clifford A. Wright notes the argument of Sicilian food authority Pino Correnti, who theorized that the word parmigiana derives from the Sicilian word damigiana, which describes a wicker sleeve used for wine bottles and the hot casserole used to prepare and serve melanzane alla Parmigiana. Meanwhile, other Italian food experts believe its origins comes from the Sicilian word palmigiana, referring to the horizontal slats on a roof, which they say resembles the layering of eggplant slices in the dish.

Admittedly, that last theory seems like a bit of a cheese stretch.

The New World Of Protein

While the precise reason for attaching “parmigiana” to the meal's preparation might be difficult to nail down, one thing we are sure of is when and how chicken replaced eggplant as the centerpiece in the dish.

When Italians arrived in America long ago, they found the expensive proteins of their homeland were far more affordable and accessible in the meat markets of the new world. Such proteins included pork, beef, and veal, which all became wildly popular ingredients in many “new” favorites, including another Italian-American creation, the mighty meatball. These newly minted Italian-American homecooks not only devised unique dishes based on what was available, but also adhered existing recipes to the new world’s meat-centric menu—altering many classics into newfound creations, including chicken parmigiana.

Originating in the Italian neighborhoods along the east coast, chicken parmigiana eventually spread to restaurants and published cookbooks of the 1950s. Before long, the dish was everywhere—even appearing on menus at restaurants that were decidedly not Italian.

Why We Love Chicken Parmigiana

Chicken parmigiana encompasses everything we love about Italian food in one bite—the chicken's juicy interior, the crisp coating of the fried breadcrumbs on the meat's exterior, the bright and slightly sweet flavor of the rich tomato sauce, and the silky texture of the mozzarella, slightly browned under a broiler.

But it’s not just the flavor—a flavor that screams comfort, by the way—it’s also the ritualistic preparation that keeps us coming back to the homemade version of this dish. The deeply hands-on approach of pounding the cutlets, dredging in flour, dipping in egg, then dropping into seasoned breadcrumbs before frying in oil, all makes for a satisfying kitchen experience. And when you create the perfect cutlets yourself, it makes the dish that much more delicious.

One of our favorite recipes and methods for delicious chicken cutlet parmigiana comes from Bon Appétit, whose culinary personalities offer a near foolproof recipe. However, one adjustment you can make in order to save some time at home is to incorporate a jar of your favorite Paesana pasta sauce into the recipe. We recommend our Marinara, Tomato Basil or Sicilian Gravy—any of these three sauces are the ideal match for a truly memorable homemade chicken parmigiana.