Pizza: A Slice Of Life

Hot and piping from the oven, there’s nothing quite like a delicious pizza with your favorite toppings and pizza sauce. 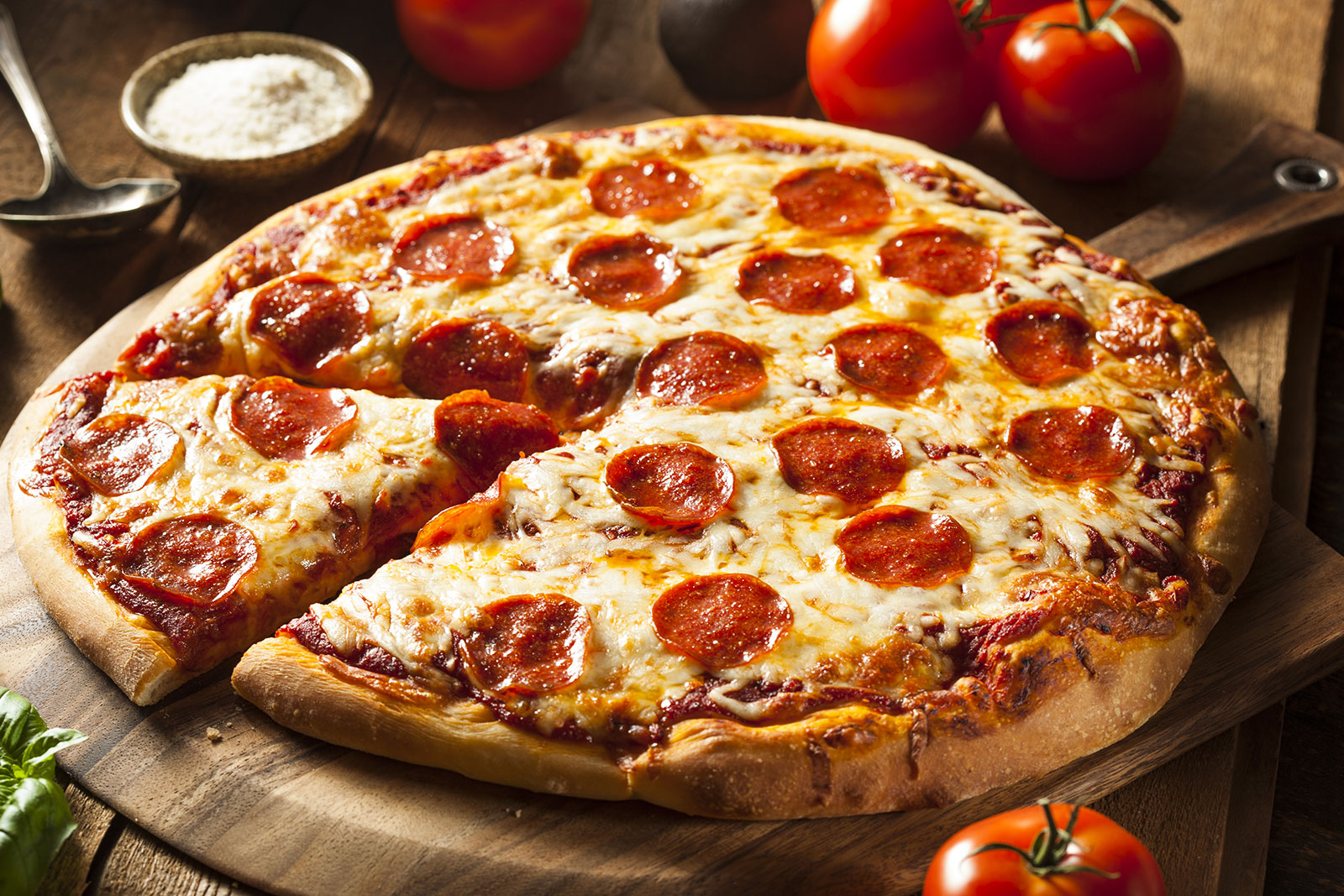 Pizza is no humble pie—it’s a billion-dollar industry and a massively popular food that has the reputation of being loved by everyone. It’s so incredibly cravable—so immediately desirable—that no matter how recently you’ve eaten, you almost never pass up a slice when a pizza appears.

No doubt you’ve heard the phrase, “more than the sum of its parts.” Well, you might not know exactly what that means, but it perfectly describes pizza. A deceptively simple combination of cheese, sauce, dough, and an array of optional herbs, spices, and toppings, pizza transforms via intense heat into an edible experience that combines gooey cheese, crispy crust, and sweet/acidic sauce for bite after bite of savory bliss.

There’s a reason “pizza party” rolls off the tongue as easily as it does. Pizza is the ultimate crowd pleaser and has remained such throughout its somewhat complicated history.

The History Of Pizza

The origins of pizza do not slide cleanly from the pizza peel. The word is thought to have Latin origins, while the food itself could trace its history back to the matzo. The legend goes that Roman soldiers fostered their love of Jewish matzo while they were stationed in a Roman settlement in Palestine—and they decided to put a Roman stamp on the food by foregoing Middle Eastern toppings for their own Roman-Italian ingredients. Later, in the Middle Ages,  peasants topped pizza-style flat bread with olive oil and herbs.

It wasn’t long after that when buffalo mozzarella would add a cheesy dimension to early pizza, along with a rudimentary form of tomato sauce.

In Italy, one of the first pizzas, the Margherita pie, was invented in Naples and was studded with colorful ingredients meant to mimic the Italian flag—red tomatoes, white cheese and green basil. This Neapolitan-style pizza would spread throughout Italy, with ingredients changing based on what was available in the various regions and the taste preferences of the locals.

Which brings the story of pizza to America. Unsurprisingly, Italian immigrants brought many of their favorite foods and ingredients from the homeland, including the basic building blocks of pizza. Eventually, in 1905 to be exact, Gennaro Lombardi opened the first pizzeria in the United States, located in the Little Italy section of Manhattan. Lombardi’s is generally credited with inventing what we know today as “New York pizza.” And though the pizzeria is no longer at its original location, Lombardi’s is still in operation today and is still cooking pizza with the very same oven it did in 1905.

The pizza business was booming by the 1930s, with Italian-Americans populating the city streets with pizzerias, before venturing to New Jersey, Connecticut, Boston, and, eventually, Chicago, where the notorious deep-dish pizza (not really pizza) still thrives today. Then after World War II, the gas-fired pizza oven was invented—this gave pizzerias a way to bake pies without charcoal or wood. This pizza-powered innovation led to the proliferation of pizzerias throughout the country—and eventually sparked the advent of the much-maligned guilty pleasure that is the pizza chain.

It’s difficult to rank a definitive list of pizza toppings, because if you’re an industrious eater, anything can be a pizza topping! That’s likely a taboo take on pizza toppings, especially to tried and true Italian-Americans. Probably the most divisive topping you could ever mention in relation to pizza is, of course, pineapple. While lots of pizza eaters have a soft spot for this acidic fruit—especially when it’s paired with ham on a Hawaiian pizza—many find its inclusion on a list of pizza toppings as unthinkable and downright insulting. Having said that, as a novelty, it’s not all that bad.

But if we’re talking about a legitimate power ranking of pizza toppings, pineapple doesn’t even crack the top 10. Let’s take a quick look at what we believe are the top five pizza toppings:

That’s right, the unassuming, everyday onion. While vegetables like mushrooms, spinach, and olives have much too high of a water content to add anything but sogginess to a pizza, onions lend a salty sweetness that pairs pleasantly with mozzarella cheese and pizza sauce. When you cook an onion, the natural sugars caramelize for a delicious alchemy of tastes and textures. The next time you order a pizza delivery or make your own pie at home, sauté some onions with a little salt and pepper for your own homemade pizza topping.

More of a type of pizza than a topping, buffalo chicken is easily one of the most popular ways to get your pizza fix. Combining the buttery, cayenne pepper-based hot sauce with stretchy mozzarella cheese and doughy pizza crust was a stroke of genius, as the vinegar bite of the buffalo sauce is tamed by the more typical pizza components. While you won’t find any traditional pizza sauce on this pie, it’s the addition of ranch or blue cheese dressing that rounds out the bite.

Yes, clams. If you like your pizza with no sauce at all—that means just cheese and bread—then the topping of your choice ought to be chopped clams (with some clams still in the shell for garnish). Popularized in a New Haven, Connecticut, pizzeria called Pepe’s, clams are traditionally served on something called “apizza,” which is a thin crust version of the New York-style pizza you’re used to eating. Clams are sweet and slightly salty, making them a fine flavor match with cheese and dough.

Perhaps the most versatile of the Italian-American cured meats, pepperoni can stand up to the intense heat of a pizza oven. And when it reacts to the heat, good pepperoni will cure slightly, resulting in crispy edges and an unctuous pool of deeply flavorful drippings in the center of the pepperoni circle. It's a salty, crunchy, oily addition that is near perfection in terms of pizza toppings. Not only is pepperoni a fantastic option, it’s also the most popular pizza topping in the country.

While pepperoni is near perfection, sausage resides at the center of perfection. Whether it’s sweet or hot, sausage as a pizza topping delivers all that meaty goodness you crave, with a touch of subtle herbaceousness that sets it apparent from the agita-inducing pepperoni. What’s more, sausage as the option of being presented as sliced “coins” or as a crumble—the latter of which brings out the fragrant aroma of meat and spice even more, while delivering a savory variety of textures. It might be overlooked by some, but sausage as a pizza topping is a classic that deserves your attention.

A Homemade Pizza Party With Paesana!

Along with our collection of pasta sauces and condiments, Paesana also delivers a line of five pizza sauces, each available in a single-serve jar that’s perfect for one fine pie. There’s the traditional New York Classic Pizza Sauce, Buffalo Pizza Sauce, Vodka Pizza Sauce, White Pizza Sauce, and Barbecue Pizza Sauce. The array of sauces available means that, no matter what their favorite pizza topping is, every pizza-loving member of your family can enjoy their favorite pie with sauces that are packed with the finest, freshest, gourmet ingredients.